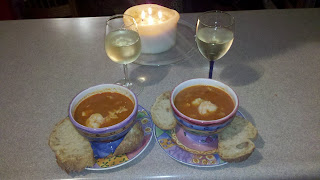 Gord's scolding prompted me to dig through the freezer and find some walleye fillets. I decided to try this recipe that I saw in Food & Wine magazine (March 2011). I had not cooked with fennel bulbs before and that intrigued me. It also called for smoked sweet paprika that I hadn't used before.

I was anticipating the fennel taste to be a bit overpowering but it was very subtle. What surprised me was the nice smoky flavor the paprika added. I substituted walleye for halibut and reduced the number of clams. It called for 2 dozen clams that ran almost a dollar a piece here in Wisconsin. Interestingly, the cherrystone clams were imported from Canada as was the walleye.

Paired with a round, full-bodied white it was excellent! 2009 Copain Tous Ensemble Viognier

The prep time was lengthy (90 minutes) but you can do most of the preparation ahead of time, refrigerate over night, then add the fish, shrimp, and chopped clams and heat.
1/4 cup canola oil
1 yellow onion, coarsely chopped
5 garlic cloves, smashed
2 large ancho chilies, seeded and torn into large pieces (this is a dried version of the poblano pepper, I used the fresh chilies because I couldn't find them in the store)
1 t fennel seeds
1 cup dry white wine (that means you might have to drink 1 1/2 bottles)
28 ounce can crushed tomatoes
1 cup 2% milk
2 dozen cherrystone clams scrubbed (I used only 7 plus 10 littleneck clams. They were expensive and they only had 7 at the stores. Could probably used canned clams as well)
1 lb yukon gold potatoes, peeled and cut into 1/2" cubes
1 small red onion finely chopped
1 celery rib, finely chopped
1 fennel bulb, finely chopped
10 oz frozen corn, thawed
1 1/2 t. smoked sweet paprika (not just the plain stuff!)
1 lb halibut cut into 1 1/2" cubes (I used walleye)
1 lb shelled and deveined medium shrimp
Crusty bread (I used roasted garlic bread) or oyster crackers

1. In large pot heat 2 T. oil. Add yellow onion, garlic ancho chiles, fennel seeds and cook over moderate heat stirring frequently until the onion begins to brown (8 min). Add the wine and cook until reduced by half, about 5 minutes. Add the crushed tomatoes and 4 cups of water and bring to boil. Cook over moderate heat until the veggies are very tender and the broth is slightly reduced (15 min).
2. Working in batches, puree the soup in a blender. Strain the soup into a heatproof bowl and rinse out the pot (I was left wondering what to do with the puree that is left over? Might make for a good sauce?)
3. Add 1 cup water to the pot along with the clams. Cover and cook over high heat until the clams open (8 min). Transfer the clams to a bowl and remove them from their shells: rinse to remove any grit. Chop the clams. Pour the clam cooking broth into a bowl and let the grit settle, then add the broth to the soup.., stopping before you reach the grit at the bottom. Season the soup lightly with salt and pepper.
4. Rinse the pot and wipe dry. Add the remaining 2 T of oil to the pot and heat until shimmering. Add the potatoes and cook over moderately high heat, stirring occasionally, until lightly browned in spots (5 min). Stir in red onion, celery, chopped fennel and corn. Add the paprika and cook over moderate heat, stirring until the celery is crisp-tender (7 min). Add the soup and bring to a boil (If you are preparing ahead of time. Simply store in the refrigerator over night at this point).
5. Add the fish, shrimp and chopped clams to the soup and simmer until the fish is white and the shrimp are pink (5 min). Season with salt and pepper. Serve the soup in shallow bowls with oyster cracker or crusty bread (As you can see in my presentation, I didn't have shallow bowls and most of the ingredients do not show as nicely).