A new adventure sport for VBL?

Some of you will remember my post describing our "adventure" to Favel Lake across beaver dams and nearly inpenetratable bogs. While my partners complained about this "death march", it turns out some people pay for this kind of experience. On August 22, 2010 the New York Times reported on "bog-trekking" in Estonia. The following picture appeared with the caption: "Triin Ivandi, a guide, in rubber boots and bog shoes to help her keep from sinking into the Viru bog in Lahemaa National Park in Estonia". A sub caption declared, "Soggy fun: 'This is like walking on a giant sponge". 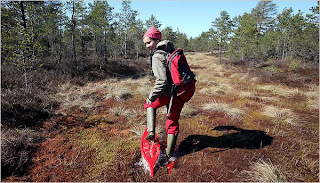 I can only tell you that without a guide and without bog shoes, this isn't much fun and is more like falling through a giant sponge. I am fully expecting Gord to be offering a couple of new services in 2011....(1)A guide wearing yellow rubber boots. (2) bog shoes. Gord, please don't try to pass off those snow shoes as bog shoes. Turns out there are bog adventures here in North America as well: Philbrick-Cricenti Bog in New Hampshire, Tannersville cranberry bog in Pennsylvania, Volog Bog in Illinois, and Burns Bog in the British Columbia.
Posted by Andy at 9:28 PM