What a strange season this has been. Ice out was possibly the latest on record and now we are well into November and the lake has been pretty much ice free. The above photo was from yesterday, Tuesday, November 23rd. Vermilion Bay is basically ice free except for some weed edges and the creek. What you can't see from this shot is that some of the bays (Meyers, Waldhof) are frozen (which is the normal progression of things). It has been cold and my motivation for taking the shot was that I did not think it could last much longer. 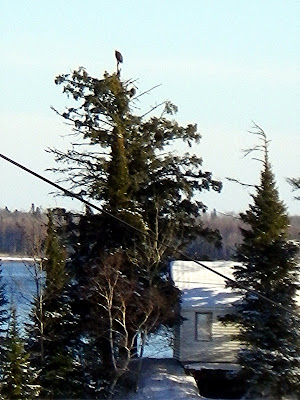 Even the bald eagles were still in their old haunts.......probably wishing their gull buddies were still keeping them company. The northern duck flocks have pretty much headed south, but there are plenty of deer carcasses to feed on! 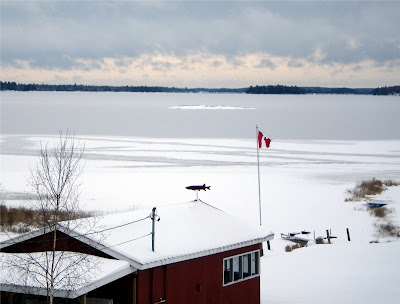 The next day things have changed......this is Wednesday, November 24th. During the late afternoon yesterday, and overnight we have this nice hard surface which has developed. The fish population can now kick back and relax for a few weeks, snug in their water beds. Time to contemplate ice fishing...................