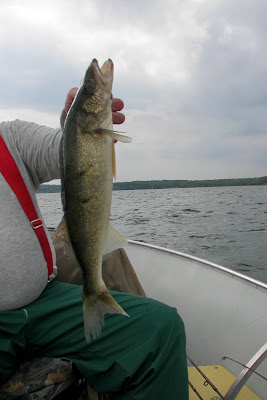 Here are pictures of both a walleye and a sauger 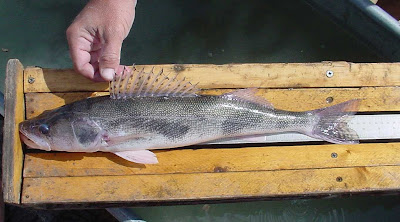 How to identify the difference between a walleye and sauger.
Is there a difference? And the answer is yes.
Many fisherman don't notice the difference at first glance but if you take a closer look you will notice the difference.
The walleye has sharp teeth, forked tail with a round and long body. The dorsal fin has two parts, which consists of the front portion having about twelve to sixteen spines and the back portion having a few short ones. They also have large glassy eyes. Their bellies are generally lighter colored than the body, which can be yellowish, brownish, or olive as well as bluish gray depending on the body of water you are fishing.
The Sauger is identical to the walleye except around the eye is a milky glow. The Sauger has a brassy coloring with dark saddle marking on the back. The belly of the sauger is white. You will tell the different between the walleye and the sauger by looking at the belly and back.The sauger is smaller and more slender than the walleye, seldom exceeding 3 pounds. Its dorsal fin, unlike the walleye's, is marked by rows of dark spots and lacks the dark blotch at the rear base. The sauger also lacks the white lower tail tip.

Posted by Perchmaster at 1:48 PM