We arrived to VBL after a 17 hour drive. It was our first time here, and we were excited to see what the next 4 days held.

We got into our cabins (very nice) and headed out to see this huge body of water. 'Bama hooked into a nice smallie and we found a few pike and small walleye.


Ater dinner we headed back out to a spot Gord showed us, and began trolling for Walleye (and maybe a Lake Trout). On my first cast, I took 2 cranks, getting ready to troll, and there was a pull of the line and a swril 40' back. "Has to be a walleye to pull like that!". Ok, I was wrong. I found on this trip, NOTHING pulls like a Lake Trout. This was my first laker ever, and what a first one....32" & 11.5lbs. A lifetime fish for me (great story and lots of memories tied to catching it).
The trip was looking promising! 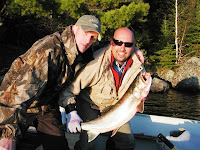 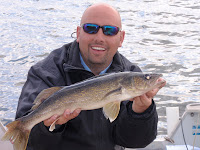 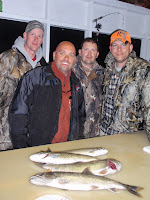 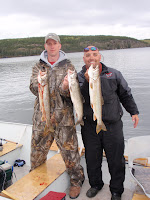 ---------------------------------------------
Wednesday was our last day...we were leaving after a day of fishing. 'Bama and I decided to head into Highrock Lake and check it out for a bit. We were going to meet Jon & Brad for shore lunch on Clearwater before a bit more fishing.
Highrock looks like a great lake. We didn't get to spend a lot of time there, but we each got a couple of Smallies. The pike fought much harder up there, and we had fun landing a nice 32" that made several dives near the boat, peeling line each time. We needed to get back to Clearwater, and we met the guys for lunch. We had a great shore lunch at a great spot, and then went fishing the Highway for some nice Pike to bring home. We caught a few and several lakers again. 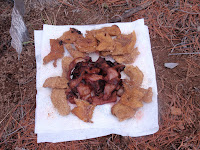 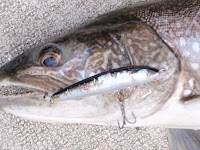 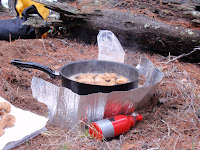 Gord, Suzanne, Mike: Thanks for a GREAT trip! You guys really do run a first-class operation. We all were impressed how there was someone at the dock to meet us, how the boats were mopped out, and warmed up in the mornings for us. Your hospitality in the lodge was great and we had so much fun. I don't think I'll have a reason to ever go anywhere else!
Gord, I'm going to be sending you a CD with a bunch of pictures for you. It will be hitting the mail later this week!
Posted by Dustin K at 9:35 PM