Here is something you don't see every day on Clearwater

Most of you that have experienced fishing on Clearwater in the past probably enjoyed the tranquility of a lake that rarely has many boats. Well....things were a bit different this fall with the high water.

While traveling up the river to Clearwater lake we came upon some huge Andy Myer's lodge boats with props full of weeds and grass. The motors were so big they couldn't reach the prop. We pulled over and gave them a hand and motored up ahead to our favorite spot on Clearwater. We arrived at our spot for jigging and we were the only two boats on the lake. 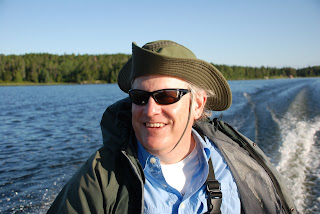 The water was calm, the sun was out, and it was a nice mixed bag of whitefish and trout. All fish were caught jigging with the "lewie rig" on light tackle. Drop me an e-mail if you want to know more.
Then we experienced something we had not seen before. A stream of boats who all headed within a few yards of where we were fishing. Yes its a big lake, but evidently this is the only place you can actually catch fish. Seriously, it was like the flotilla of boats we see fishing perch in Wisconsin when the bit is on. 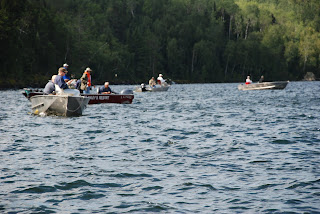 The interesting twist this year, is the other boats were fishing with lures tipped with minnows. Without much success I might point out. Even Gord arrived at the scene and was kind enough to point out his "secret spot". 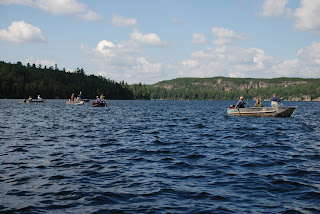 Well there is no such thing as a secret, ever since the "Woods and Water" television show a few years ago. We all know John Gillespi has a difficult time keeping a secret. The good news? The fishing was great in our two boats. The better news? Nobody else was catching much. After catching our limit we decided to mess with the other boats a little bit. We rigged up the trolling rods and proceeded to troll about 30 yards out from the flotilla. We consistently caught double after double in both boats. This attracted some attention. One of the other boats was curious enough that they motored over to Shawn and asked him what he was using. Shawn, always the helpful angler pointed out that anything shiny seemed to work. In fact that was true. We were trolling 4 different spoons, and all were catching fish. E-mail me for details. Fascinating. We discovered that the fish were not concentrated in this 40 yard area. In fact, you could catch trout in all parts of the lake that had depth and fish on the locator.

If you have never tried trolling for trout or jigging for trout and whitefish....give it a try. Its a beautiful lake with great fishing opportunities. And the truth be told, this kind of boat traffic is unusual, and thus the post. In fact, during low water periods, Gord is the only lodge with portage boats on the lake. Can you taste the smoked trout and fish cakes? 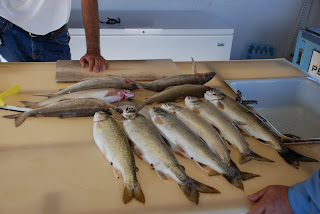 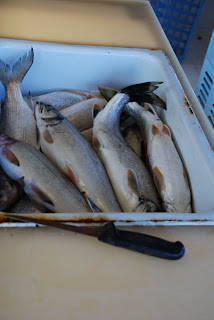