Back in July, Kurt reminisced about visiting Favel Lake and said it was on his bucket list after a failed attempt a few years ago. Well, Bill, Shawn, Brian and I made it back to this lake a few weeks ago. Visions of fish which hadn't seen lures danced through our heads. Now I was tempted to post monster pike pictures for all of those lurkers out there, but let me tell you the honest story.

Water levels are very high on Eagle right now. Navigating the first part of the stream was a breeze. 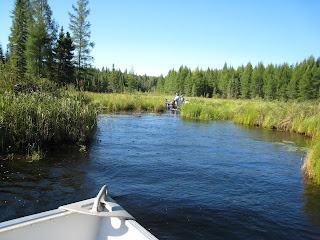 Ah yes, it was a glorious day. Just think of those monstoreous pike we are going to see today! Then we came to the first beaver dam. Gord warned us about these. He said there might be more than one. 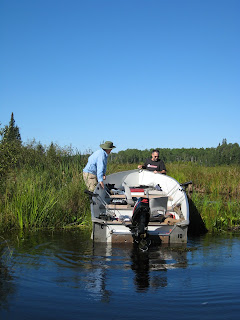 When I had asked Gord, "who was the last person back to Favel Lake", he replied "Keith Mitchell". I began to wonder if he meant Keith the fish? We cruised for a while longer. "That wasn't so bad", said Shawn. 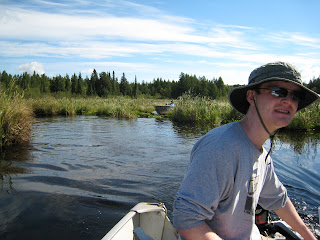 Well, then we came to the second beaver dam. This dam had an elevation change of close to four feet. Oh yea, Gord said there might be more than one beaver dam. 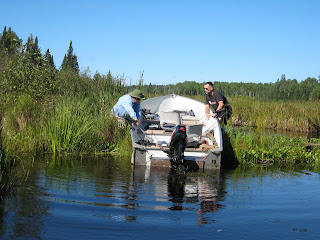 After breaking through the second beaver dam, I'm thinking that Favel lake just dropped two feet in elevation. Bill says, "those beavers are going to be mighty angry. We slug on. The channel begins to dissapear and is beginning to be consumed by acres of floating bog. We push, pull, and paddle through and over narrow openings in the bog. I'm thinking, "Brian will never want to come back to VBL again". He troops on. 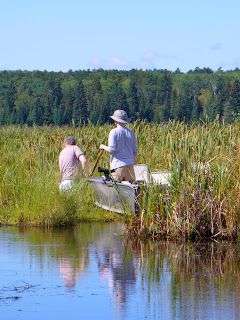 Can you see the lake from there boys? They reply, "I don't think so". We've gotten so far back it doesn't make sense not to continue for a chance for fishing for foolish pike. 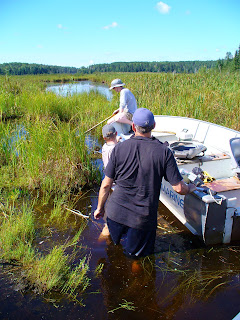 In some places you could stand on top of the bog and it would slowly sink. In other places you went through. At one point I jumped on to a thin layer of bog and went completely through only to catch myself at the arm pits. The water was over our heads. It was like playing a game of frogger. Could it be? Is that the lake up there? Yea, but the channel is completely gone. 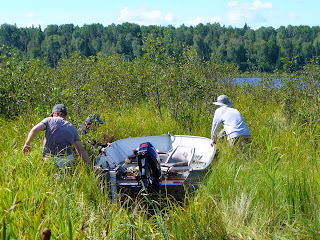 Is that a leech I feel crawling up my leg? Those biting flies are awful. Well, we make it to Favel lake and revel at the beauty of this lake on a nice sunny day. We are greeted by three loons who seem puzzled by our presence. Time to start trolling and casting for our sweet, sweet, reward. The lake was thick with pike. 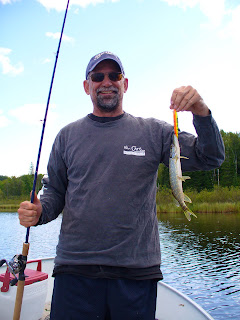 Nothing but snakes. If there are big pike in this lake, they are smart and back under the shade in those acres and acres of floating bog. This was the bad news. The worse news was we had to go back through the "death march". Interestingly that's the term that one of Gord's competitors used to describe the 20 minute easy portage to Clearwater lake. Perchmaster....you can take this one off your bucket list. I've got the mosquito, fly, and leech bites to prove it. 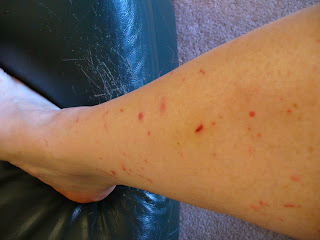 I've learned new respect for the friends and family that join me on these trips. I knew there was a reason I brought them along. I also have a renewed respect for the man or fish they call Keith.This was a true adventure. Now don't get me wrong. I fished Caribou lake for the first time this spring and I plan on going back. I also plan on trying to explore a new lake on each future trip to VBL. And perhaps this trip should be the hazing event that all new VBL guests like Brian should endure? Get out of the rut and explore all that VBL has to offer!