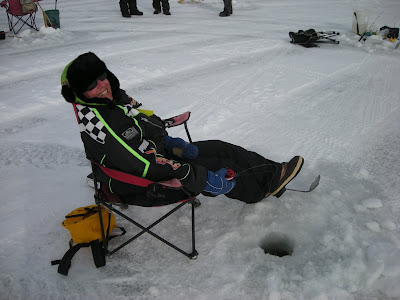 The cold north winds did not bode well for those on the ice. Here Susanne smiles in anticipation, shortly before she loses a good fish with her famous "I'll just remove my gloves before I battle the fish" maneuver. This was a disappointment since only a few other bites occurred with one "fish catching" exception. That was my encounter with the mighty stickleback!! Using a Salmo Chubbydarter I managed to snag one of these denizens of the depths, a finned fury of prehistoric proportions. Since it was a catch and release tourney, I carefully transported my "catch" to the weigh in station. There I was mocked by a small child who kept babbling annoyingly "you cheated...you cheated"! Even the adults looked a little suspicious. In my opinion, a one inch long stickleback that was snagged should count for something.......apparently I was wrong! 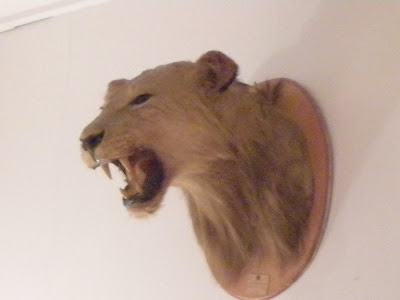 Well, the conclusion of this event took place at the Lions Hall in Vermilion Bay where, mysteriously, it is the only Lions Hall in Canada with an actual lion head on the wall. Not a stickleback in sight, or trophies for such a catch. What a rip-off. 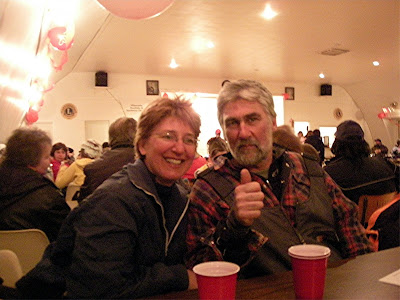 All was not lost. After a few refreshments, an amazing attitude adjustment occurred. All thoughts of my stickleback receded. Since no fish where caught (I may have tried to dispute that claim) all prizes were raffled off. I ended up with a $50 gift certificate from the C0-0p! We can at least eat for another week!