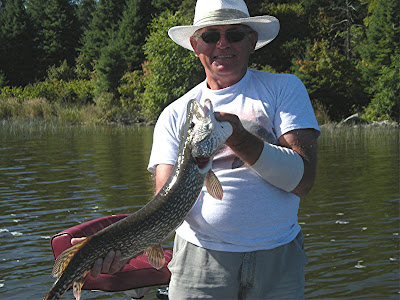 September 24, 2009 and Henry & I decide we should take Henry's boat and fish the far East end of Eagle Lake for muskie. A sunny, calm day with water temps around 68 degrees it would not seem to be a great muskie day. It turns out it really wasn't, except for one fish. Above, Henry with a decent northern, one of a very few caught today. On the first spot we fished, Henry had an nice 48" muskie follow. 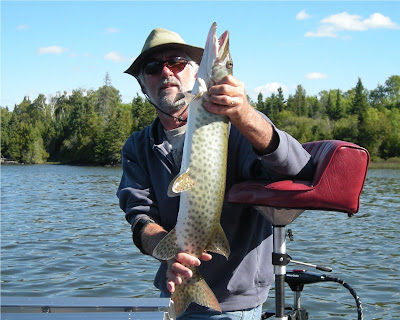 Later in the afternoon I did manage to land this small muskie. If I don't seem too impressed it was probably due to the fish I lost earlier in the morning. 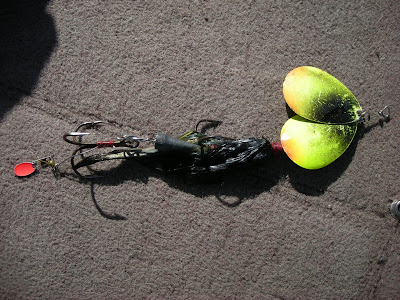 This is the lure that caught the small muskie and also hooked the "MONSTER" that I lost earlier in the day. If my recollection is correct, the bait is a Shumway "Boo-Tail".......probably mid 1980's vintage, judging by the amount of rust and lack of tail. Let me tell you about the fish of a lifetime I lost today. Firstly, as anyone who has fished with me can support, I don't exaggerate the fish I catch and release. Secondly, after fishing Eagle for over 30 years I have probably caught two fish that, if stretched, could be said to be 50 inchers. Nice fish.......I've seen bigger. Until today the biggest fish I ever saw was in Meridian Bay, maybe 25 years ago, fishing with Bill Balcom (NewMexicam) who I still fish with today. The fish was a lazy follower, size was undetermined....it was a huge fish. The fish I had on today was every bit the size of that fish. My lure was probably ten feet from the boat when out of the brownish East end water this huge head appears, followed by the rest of the fish that seemed to go on forever. In slow motion the fish .......which at that moment I was thinking several things about........the head was absolutely huge.....its eyes seemed to be so far apart......and the crease between its eyes extended down its body to its tail.....solid muscle. It's mouth opened behind my lure..........I recall thinking that the lower jaw bones were crazily big........and then closed on my bait. Are you supposed to set the hook now? I hate these moments.........well I kind of set the hook, and the fish is on! It did a brief head thrash on the surface and I yelled to Henry to get the motor up. I was actually thinking of the trolling motor ( I was in the bow) but Henry thought I meant the big motor. No matter the fish went down, bypassed the trolling motor and headed to the rear of the boat, where it surfaced like a submarine. It seemed like 6 feet of fish back there thrashing around.........in slow motion it did the head thrash with mouth open routine.........I'm thinking this hook isn't going to hold..........and I'm right. The fish is off.......all thoughts of where the net is and getting the camera ready are out the window. 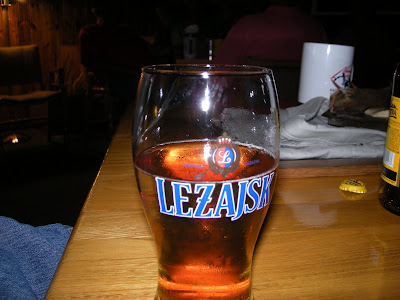