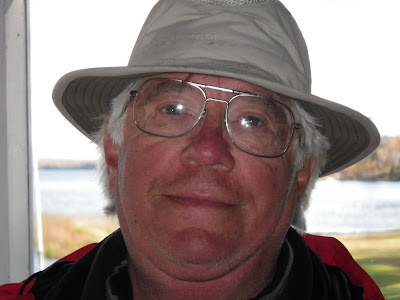 Keith Mitchell, from the "Island", was part of the excursion to tackle the lake trout before the season closed on October 1st. As we navigated the creek to the trout lake we were surprised to see the work the beavers had done on their dam. Keith stunned us that day by announcing "I have heard that the young beavers taste the best!" Was this a dark side of Keith that had not been revealed to us before? A connoisseur of beaver? We laughed the rest of the way up the creek! 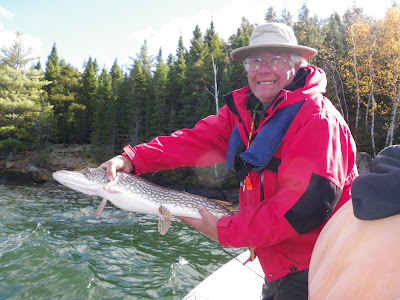 Keith was very excited to catch a fish (and change the subject)! No Keith, that's not a trout. 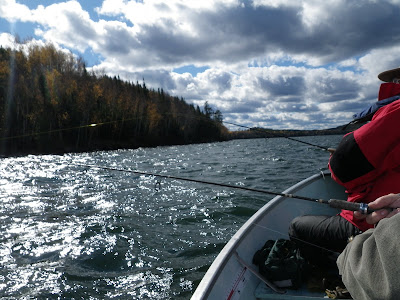 We struggled at first trying to target a deep water bite. We could mark fish on the locator, but getting them to bite was a problem. As the water temps were still fairly warm I was not confident that the trout were going to be shallow, but when all else fails you have nothing to lose by changing tactics. We moved down the way and started casting the wind and wave swept shorelines. 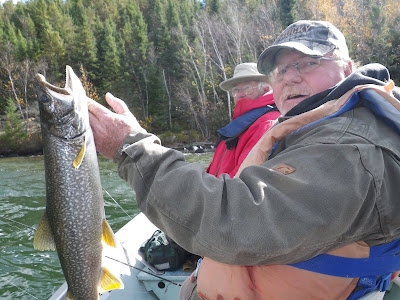 Ron (Jo-anne's hubby) connects with a lake trout in the shallows using a Little Cleo spoon! This method ultimately works better for Ron, since the $5 reel he has been bragging about has only 30 feet of line on it! Regardless, I think we are on to something! Using this technique we caught many trout in the 3 to 6 foot depth range....basically right up on shore. So much for my water temperature theory. I do think the wave action was triggering these fish........ 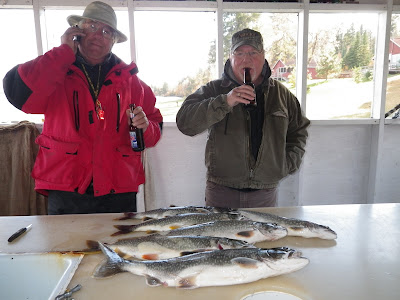 The boys after a hard day on the lake. Some good eaters to enjoy till the trout season re-opens on January 1st. By the way, Keith was right........the small (young) ones do taste better!