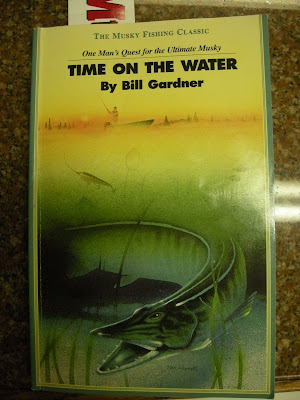 Brad Walker, a long time VBL guest, rod maker and Wisconsin muskie guide (www.tealriverrods.com) mailed me this copy of muskie classic "Time On The Water" by Bill Gardner. I said I would read it over the winter, and between glasses of wine and fattening cookies, the Christmas holidays allowed me to peruse this book. To elevate the "Electric Beaver" out of gutter, and into more of a cerebral plane, I offer this review of one one man's effort to catch "the big one"!

The book is based on Bill Gardner's decision to quit his job and move to the Hayward area to spend one full season to fish for, and attempt to catch, a trophy muskie. Written as a daily diary it documents the futile efforts of trying to catch a decent fish in Wisconsin. To be fair, this was in 1983 and any keeper (30 inches ?) was most likely clubbed and put on display at the local tackle shop freezer. This attitude was beginning to change but it was obvious that years of killing everything has taken it's toll......it seems to be a big deal just to catch a northern during a day of fishing! I don't want to ruin the ending for those wanting to read this, but let's just say that Bill should probably have kept his job.

While I found the fishing described in the book painful at best, and seriously depressing at worse, at least from my Eagle Lake point of view, it does paint a picture of muskie fishing history. It also points out accurately the difficulty of connecting to a really big muskie. This should probably be required reading to those who's expectations are based on the bull-crap dealt out by "some" muskie magazines or by fishing websites that give the impression of abundant giant "hawg lunge". On the bright side it sure made it clear just how lucky I am to spend my time fishing on a lake such as Eagle.