Good Year for Lakers at VBL 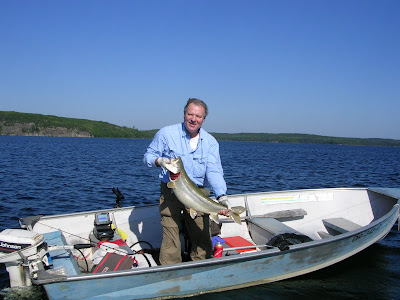 I've been chasing after lake trout on Eagle and Clearwater for many years. This summer proved to be very good for me. I landed six that went 30 inches or better. Lake trout in this class are terrific fighters and, for me, are more fun to catch than any other species. The big ones usually come while trolling deep down in the Trout Holes of the West Arm of Eagle. That method produced a 36 inch fish in August. I wish I had a picture of that beauty to show you, but I was fishing alone and couldn't manage a decent shot after unhooking it. Watching it rise to the surface after a 15 minute battle is something I'll remember for a long time. It was released unharmed and I watched it's image on my sonar unit as it swam back to 75 foot depths. It was one of four really nice fish I caught that day.

The Trout Holes have never produced a lot of lakers for me on any given day. I have to work pretty hard for these fish, which usually means hours of trolling, searching for fish and trying to trigger strikes. And I'm not always successful either. I spent close to nine hours trolling on a beautiful September day that produced one half-hearted strike. No hook-ups and no fish makes for a very long day. Sometimes that's how it goes when trying to connect with a brute.

But then there is Clearwater Lake. There are lots of lakers in Clearwater, along with whitefish and quality pike. I like vertical jigging in deep water for these trout using the "Lewis Rig". My friend, Andy, came up with this system which consists of a .75 ounce silver spoon and a white hair jig tied on 24 inches up from the spoon. We use 10 pound test FireLine with a flurocarbon leader to catch a nice combination of lakers and whitefish. The fishing can be exceptional when you catch a strong bite.

Most lakers will run about 21 to 24 inches. These fish are a ball on light tackle, but this summer I got surprised twice by big trout in Clearwater. I had a 33 incher take the jig, and on a different outting, a slightly shorter, but much fatter fish, slammed the spoon. That's the one pictured in this post. This fish could not be sucessfully released. Gord weighed it at 15.5 pounds and said it contained a good size whitefish in it's belly. A filet from that laker will be going onto the grill someday soon.

Most anglers who fish out of VBL ignor the lake trout fishery in favor of walleye and pike. Perhaps this post will stimulate your curiosity. If so, I suggest you reference the lake trout primer that Gord and I wrote. I think you'll find it helpful. It's located on the VBL web site.
Posted by Professor at 9:09 AM