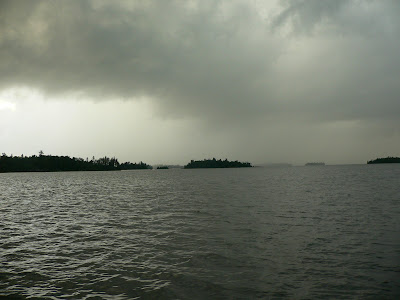 On Friday I was able to take Brandon Lacrosse and his dad Mick out for a few hours of muskie fishing here in Vermilion Bay. We had a few days of high winds and recurring showers, and Friday was no different. The barometer was on the rise (I checked this later) and it turned out to be one of those days you could do no wrong. Pretty much every spot you would think a muskie might be, there was one.........and they were active! 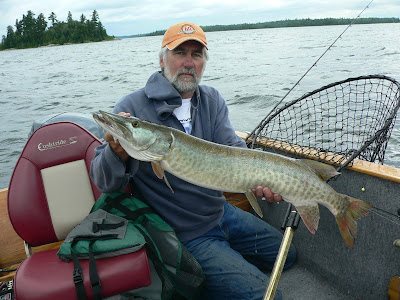 The first fish was yours truly with a 38 incher caught on a small black and silver Mepps Muskie Killer doing a figure "8". 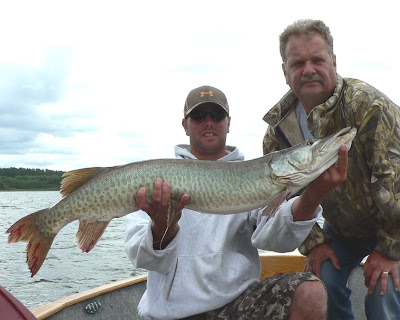 Two spots later Brandon tied into this nice 42 incher. In between, Mick managed to hook into another 38 inch muskie (sorry, no picture). In total we ended the day with 4 muskies (Brandon had a second fish in the boat.......28 inches) caught and probably 6 or 8 others that followed.
It was a great muskie week too. We had 12 fish caught with the biggest caught by Brandon's buddy Dan Witzlib.....a beautiful 50 incher. Dan also had a 47 incher. John Biesterveld and his father in law, Clay, had a number of muskie boated including a 48 inch fish. I was not able to download pictures of these fish but will do so if Dan or John can email them to me. The moral of the story is..........."you should have been here this week!" Don't despair though.......the really big fish season is still ahead of us!