During the Spring of 2003 I was contacted by Gord Bastable and invited to refurbish a Giant Wood Muskie Carving. He had found me at my old website natureartists.com and he was confident I could carve and paint muskies. This carving was originally created by Bill Sitter of the Chicago Illinois USA.
The carving didn't meet Gords exacting standards for perfection.
This carving was replica of a Giant Muskie caught in October1940 by American Ed Walden while fishing in Vermilion Bay section of Eagle Lake. It was caught on a spinning blade "Muskill" lure.
The overwhelming record length of 59 inches, girth 31 inches and weight o 61 pounds 9 ounces!

He requested that I travel to North Western Ontario and re-carve the fins and completely repaint the markings. As a reward for my efforts I could stay at a cabin for a week and when not working on the wood fish take a moment to enjoy Eagle Lake.His letter of invitation reads."Would be happy to have you and Diane come up the last week of August 2003. I hope to take you out in the cedar-strip boat myself  for a little musky fishing. The wood musky looks forward to a new tail & paint job!"

I had read about Gord Bastable and Eagle Lake during the 1990's in Ontario Out of Doors magazine. It was a chance of a lifetime! 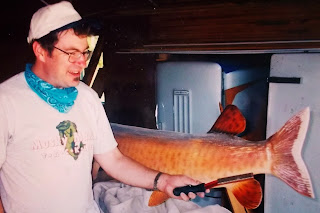 Cutting and carving a muskie tail 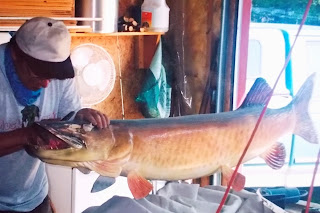 Sanding and re-shaping with rasps, saws and sandpaper. 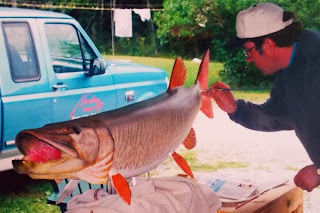 Carefully mixing acrylic paint and trying to match the colour of and Eagle Lake Muskie Pattern. 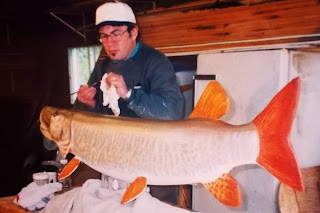 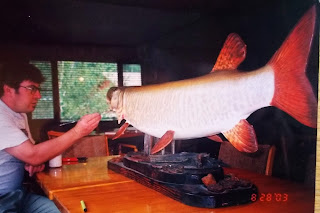 Clearcoat  brushed on the finished carving. 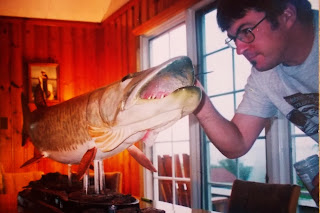 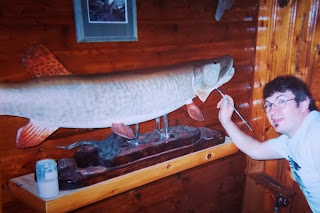 A small celebration  of an exotic shrimp ring and cocktails were presented when the Giant Musky was placed on diplay.
Perhaps there swims in EagleLake  a fish equal in size or larger than Ed Walden's Giant Muskie ?
Posted by charles W. Weiss at 9:07 PM